Dropping Pebbles in Still Water: Breaking the Unbroken Whole of the Universe

From Victim to Victor! Defeating a Victim’s Consciousness

Psychokinesiology: Doorway to the Unconscious Mind

The Gospel Truth: The Heresy Of History 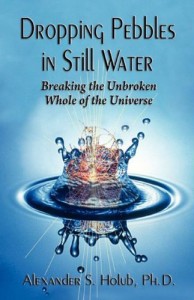 Listen to a internet radio interview with Dr. Alexander Holub >

All that is comes from the mind; it is based on the mind, it is fashioned by the mind.

Dropping Pebbles in Still Water:… is all about personal change. It presents the processes for making personal change in a truly scientific manner. In it you will see how making personal change is a scientific endeavor; an experiment. You will learn how to use the scientific method to help you home in on what works and what doesn’t. Working with the principles expressed in this book you will gain a deeper understanding of the connection between the macrocosm and the microcosm. Through the techniques in this book you will find how you can unify your thoughts, feelings and actions to more effectively achieve your goals. Dropping Pebbles in Still Water:… will take you beyond the basic processes of visualization, affirmation and belief to knowing what is actually involved in making personal change.

What many who want to make changes in their lives don’t realize is that whatever techniques they use, whatever they’re doing is only an experiment. By realizing this and understanding the basic processes of an experiment much more insight can be gained from what is being done. Often, if something doesn’t work or doesn’t work completely it is labeled a failure. You never really know something has failed until you label it as a failure. That means you have stopped working toward your goal. As Richard Bandler, the co-developer of Neuro-linguistic Programming has stated: “There is no failure; only feedback.” Dropping Pebbles in Still Water:… shows you that you can use this feedback as a stepping stone for making changes happen.

The only true constant in the Universe is change. Many people are waiting for the Universe to change to suit them and they hope they can grab on to it as it swings by. If you’re waiting for the Universe to do the changing for you while you sit idly by expecting something to happen, you are in for a rude awakening. Change begins within. If you’re not willing to do what is necessary, to sacrifice your time now to make the changes needed in yourself you will not see the change happen in your life. A modern axiom states: “If you keep doing what you’ve always done you’re going to keep getting what you’ve always got.”

Physical concepts are free creations of the human mind, and are not, however it may seem, uniquely determined by the external world.

Just as psychology and the new physics motivates you to see the world differently Dropping Pebbles in Still Water:…gives you the knowledge and skills to understand, recreate and navigate your new world.

According to theoretical physics, you exist in more than one state; or more than one universe. What causes you to experience one particular state or universe and not another of the myriad of possible states? The quantum physicist says your experience of a state occurs when a wave function collapses. The next question is: What is it that causes a wave function to collapse?

To the theoretical physicist the world looks classical because of the interactions of the object with its surroundings (i.e. other objects in the environment). It is these interactions that conceal its quantum effects. The most important quantum effect, the one that binds individual particles together into an indivisible whole is entanglement. Entanglement is the idea that there is no such thing as “separate parts” in the Universe; everything is part of a unified whole and all of this is interconnected. It is entanglement which produces what Einstein referred to as “spooky action at a distance.” Entanglement has been observed on the quantum level and since solids can also be entangled, the question becomes: Could a large, warm system (like a human being) also experience entanglement? (Vedral 2011)

Since the beginnings of quantum theory it has been associated with the submicroscopic world. It has been generally assumed that the principles governing the microcosm do not apply to the macrocosm. There are, though, some quantum effects that can easily be seen in the macrocosmic world (e.g. you cannot know the exact location and speed of an object at the same time) it is just a bit harder to notice them. Seeing these effects has nothing to do with the size of the object but with how quantum systems interact with or influence each other. (Vedral 2011)

Non-locality is seen in the process of synchronicity and causality. This is when seemingly unrelated events come together without any discernable causal connection. This may indicate another level of reality. (Koopman n/d)

Classical space-time emerges out of quantum entanglements through the function of decoherence. Decoherence is the process of leakage of information between states. The world looks classical because of interactions an object has with its surroundings (i.e. between states or other objects). Information about a particular state (object) leaks into its environment in the form of photons and heat exchange. Distinctive quantum phenomena involve combinations of different physical states, and these combinations tend to “leak.” (Vedral 2011)

Even though many physicists insist there is a difference between the classical and physical world and the quantum world (Wacky Physics 2012) quantum mechanics is seen to apply on both the microcosmic and macrocosmic worlds. Space and time are two of the most fundamental concepts in classical physics. In quantum physics they interconnect without reference to space and time. The dividing line between the quantum and classical worlds is the use of classical space and time as a framework to describe spaceless and timeless processes. (Vedral 2011)

The Universe is not-uniform in spatial structure. It is this non-uniformity that plays an important role in all creation, both macrocosmically and microcosmically. (Koopman n/d)

Space is not the same in all directions. Everything existing in the Universe is composed of building blocks. These building blocks have their own distinctive properties or qualities as well as a specific energy potential. This potential allows them to respond to the changing conditions as they journey through space. (Koopman n/d)

Space changes the matter within it while simultaneously matter changes the space it occupies. This interaction may reach a state of equilibrium and an object is born. (Koopman n/d)

Nothing exists outside of the mind: All we perceive are external representations of internal concepts.

The reality that we perceive is commensurate with our stage of evolutionary progress. (Koopman n/d) The reality we create is likewise commensurate with our stage of evolutionary progress. Consequently, in order to make changes in your external reality it is necessary to change your internal reality —- your state of consciousness. As your consciousness changes you will begin to evolve and progress. Remember, with evolution comes change and with change comes new perceptions of a whole new reality.

You are about to embark on an exciting adventure. It is a journey into a new world of thought, mind and reality. You are about to change your consciousness in such a way that you will not see yourself and your created universe the same way again. You are about to change the way you will be choosing to view your reality. As Lao-Tzu stated more than 2500 years ago, “The journey of a thousand miles begins with a simple step.” This is more than a simple step: It is a quantum leap. You will be learning new ways to understand and to interact with your reality. You will no longer be waiting for the Universe to do something. You will understand you have a very important role in creating the Universe.

Every thought that you are thinking with the appropriate intent, focus and emotion sends waves out into the Universe. These thoughts are the pebbles in still water and the waves they produce are waves of change. They will return to you the effort you put into them. By following the principles set forth in Dropping Pebbles in Still Water: Breaking the Unbroken Whole of the Universe you will find your universe changing in ways you only dreamed about.